Drop In Lombok Surf Lodge has a small team of excellent surf instructors who are highly trained, fluent in English and love sharing their wealth of knowledge and experience with surfers who are keen on learning and improving their ride. All our surf instructors, with the exception of Scott and Tyler, were born and raised in Lombok. 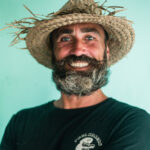 Scott: "Papa Smurf" of our crew

Before Scott came to Lombok in 2007, he travelled and surfed the world. His passion for surfing is endless; he loves talking about it for hours and inspiring ours guests with his exciting stories. He is not only a gifted surfer but also a passionate teacher who knows how to share technical surf knowledge and stoke our guests at the same time. Scott has been working with some of the boys for more than ten years and he has not only taught the boys English, but has also passed on much of his knowledge and trained them to become the best coaches on the island! 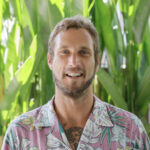 Tyler grew up surfing in Cocoa Beach Florida and fell in love with the ocean at the age of 3.
Surfing and Skateboarding were passions for Tyler growing up. Surf coaching and Lifeguarding has been his trade since 2007. Leaving the US in 2012 he has traveled the world using his passions to fund the journey. Landing in Indonesia in 2015 he has not looked back. Tyler has a strong passion for personal development through journaling, meditation, learning, creating and surfing. 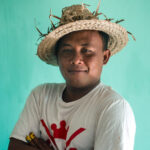 If anyone has two sides, it is our Bahar. If you meet him onshore he is shy and very quiet. But as soon as he gets into the water, whether surfing or in the pool, Bahar turns into a solo entertainer. He is the master of the correct positioning. Even his colleagues wonder how he always sits in the right place in the line up. 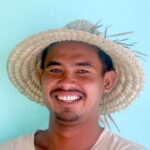 Zul lives in front of one of our favourite spots in Awang. His local experience for all spots is priceless.

He's always on time, very organized and an amazing coach in the water. He makes everyone feeling good and safe with his charming attitude. 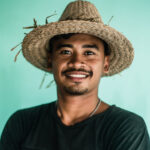 His charming manner ensures that everybody feels confident while surfing. He is a machine in and out of the water and loves to spend his spare time at the local gym. 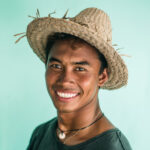 His knowledge and passion for coaching newbies are legendary. He got trained by Scott and has been working with him for over 10 years. Rin is known for his detailed theory workshops where he also teaches important aspects about the surfing rules and safety. 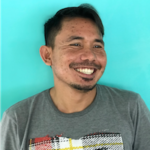 Ing: The guy with the insider tips

Ing is our local manager at Drop In and looks that everything runs smoothly. He knows Lombok like his pocket and has great tips for any adventure! Super friendly, patient and his knowledge about the Island is unpaid. 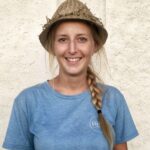 Kendall is originally from South Africa and joined our team in February 2022. She takes over the management position when Ing has his days off.
Her lovely and kind spirit makes our team even sweeter. 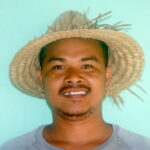 Kayun has been working with us for the last several years and is our handyman for all the little and bigger things that have to be fixed in and around our house. He always has a big smile on his face and a heart made of gold.

Mirjam and Catherine met years ago in the Swiss Alps where they were studying, skiing and enjoying life to the fullest. They travelled to Indonesia for the first time in 2007 and it was love at first sight. After having visited Indonesia several years in a row, they decided to take a break from their jobs in Switzerland to follow the dream of building a tropical home in Indonesia. When Mirjam and Catherine met Solli, that dream was about to become reality. Mirjam and Catherine both have a base in Engelberg in the Swiss Alps where they work as teachers. They travel to their tropical surfer's home in Lombok as often as possible.

Solli is originally from Munich, Germany where she owned a café. She discovered her passion for surfing later in life and decided she wanted to surf all-year round rather than just a few times a year. To make this happen she moved to Lombok which she has been lovingly calling her home ever since. In addition to co-owner, Solli is Drop In’s General Manager and the hostess ensuring you have an excellent time at the Lodge. 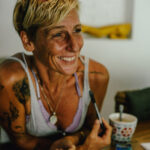 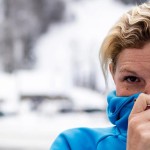 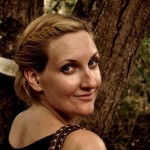